The Rule of 72 is a useful piece of easily understood arithmetic. It’s a simple way to calculate compound interest, and it’s invaluable for illustrating the unrealistic doctrine of perpetual economic growth.
Here’s how the rule works:

You deposit $1,000 at an annual interest rate of 6%. How long will it take to double your money?

It works the other way too

I want to double my money in 10 years; what annual interest rate do I need?

Provided inflation doesn’t eat too much of your profit it’s all good news; but when we look at economic growth, or population, or the use of the planet’s resources, the rule reveals that things are not so rosy.

China, India, and most developing countries aim at economic growth rates of about 8%. The Rule tells us (72÷8 = 9) that if they maintain that rate their economic outputs will double in 9 years. In 18 years they would quadruple.
Growth in an economy is accompanied by a similar rate of growth in resource consumption, and almost as much greenhouse gas emission.
How long can our environment cope with that? We’re already consuming far more resources and producing more greenhouse gas than the planet can sustain.

In New Zealand in 2010, our then prime minister, John Key, vowed that his government would enable us to catch up with Australia in per capita GDP by 2020.
Bearing in mind that he earned a B.Com in accountancy, attended management studies courses at Harvard University, and was a successful Wall Street currency trader, you’d think he’d have a decent grasp of arithmetic.

Unfortunately, like most politicians, he didn’t appear to have done the sums. Using history and The Rule, we’d have needed to achieve at least 7% annual growth to achieve that target, assuming that Australia maintained their usual performance.

It didn’t happen; even when helped by irresponsibly excessive immigration, we managed our usual 2% to 3% . We’re still miles behind the Aussies.

Globally, we’ve done quite well in the last few years. World population growth is down to a little over 1% per year; but even that would give us an unsustainable doubling of population in 70 years.

We can fix it.

In countries where we’ve managed a significant increase in the standard of education for girls, population growth has drastically reduced, and often gone negative. This is something that needs maximum attention and resources if we want a viable planet for our grandchildren.

In some countries, like Nigeria, many are still producing 8 kids per family – doubling population in 20 – 30 years. And before we in the developed world get too smug, some groups, like religious extremists and the Pasifika population here in Auckland, are right up there with the Nigerians. Again, when girls from such groups get a good secondary education, the problem magically goes away.

A few years ago I met a great New Zealander, Professor Paul Callaghan. He opened my eyes to new ways of looking at our world. It was a mixed blessing; he condemned me to a future of enlightenment on the one hand, and frustration, anger, and despair on the other. Dr Callaghan, a physicist from Wellington’s Victoria University, had recently been made a Fellow of the Royal Society. When he hopped on the plane to return to New Zealand after picking up the award, he also picked up a book called “The Undercover Economist”. In doing so, he changed the direction of his life. Mine too. I’ve talked about Paul and his must-see presentation “Beyond the Theme park and the Farm Gate” here. Although it’s about New Zealand’s economic decline; why it’s happening, and how to reverse it, his conclusions are relevant to non-Kiwis, anyone who wants to understand the requirements for prosperity in an economy.

Dr Callaghan was knighted not long after I met him; then he was made New Zealander of the year in 2011; and the Labour Party had him as keynote speaker at their annual talkfest. He was a great New Zealander who understood where our country is going wrong; why 500,000 of us live in Australia; and what’s required to fix the problem. New Zealand isn’t awash with people I have great respect for. Sir Paul was definitely one.

I was enlisted to help him set up a website to promote his message, but he lost his battle with cancer and died, far too soon, in 2012.

Our politicians of all stripes thought enough of Sir Paul’s work to honour him, but they’ve never acted upon it. He motivated me to learn as much as I could about what’s going wrong in our country and on our planet. Here’s some of it:

When the world was young…

One of my earliest memories is of the VJ day parade in Dunedin, a celebration of the surrender of Japan and the end of World War II. I stood outside Whitcombe and Tombes on George Street listening to the bagpipes and watching someone in the parade pushing a hand cart which carried an effigy of Hitler’s body sans arms, legs and head. I was 4 years old but 70 years later I can still see it clearly. At that age children don’t usually understand much about political events, but the time between the start of World War I, the terrible influenza epidemic, and the end of World War II (with the catastrophe of the Great Depression squeezed in between) was so cataclysmic and all-pervasive that even small children probably had an inkling of what was going on, and well knew who Hitler was. 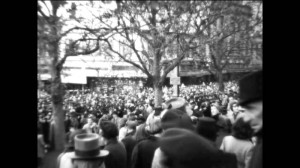 My generation’s childhood was dominated by that war long after it was over. Most adult men were veterans of at least one war; my best friends Onno and Ingrid were refugees from a devastated Europe and their parents told of wonderful things like eating rats and cats to survive; in those pre-TV days the movies, the news, and even the comics were about “The War”: the Dam Busters, Rockfist Rogan, Nazis, Tommies, Yanks, and Japs. Winston Churchill and Hitler, Berlin, London, and Hiroshima all loomed large in our young lives. Meat and butter were rationed so that we could send vast quantities of produce “Home” to England.

At the end of it all we had a new United Nations, a booming world economy, unbounded optimism and the general idea that we’d learned our lesson. The age of war was over.

END_OF_DOCUMENT_TOKEN_TO_BE_REPLACED

How the money manipulators are ruining you

Here’s a full length documentary by Paul Grignon explaining how it’s done. It’s 40+ minutes long, but if you’re pressed for time the first 10 minutes or so will be enough to get you hot under the collar. If you’re not into video, read my summary below.

I didn’t think so,

Most people have trouble believing this stuff. Here’s a recent brief article in The Guardian lifting the corner to look at the sorry truth. Generally speaking, the news media don’t expose this outrage. Too many big players are reliant on the system to flourish and to maintain themselves in the ranks of the 1%.

The Guardian article refers to this document from the Bank of England which, surprisingly, confesses to the hidden-in-plain-sight dirty secret.

Here it is in a nutshell

END_OF_DOCUMENT_TOKEN_TO_BE_REPLACED

The video which resulted from Annie’s deliberations is a must see for everyone who thinks it’s a good idea to keep our planet viable. It’s a must-see even if you don’t give a stuff about the planet but you just need an excuse to get off the madcap consumer roller coaster.

How did big business create a system that puts consumer products on the shelf for a fraction of their actual cost? We’ve all wondered about it. Annie went to find out and it changed her life.

She tells you in an entertaining and disturbing way how this obscene system started, how it functions, and why—one way or another—it cannot last. She’ll tell you the real cost of our addiction to stuff and why your grandchildren will pay for it tomorrow just as the world’s poor are paying for it right now.

Please visit Annie and The Story of Stuff

Click right here to go to the Story of Stuff website where there’s a lot more stuff about our obsession with stuff. Annie has become  the Executive Director of Greenpeace USA recently, so has less hands-on role at the website.

The best dessert in the world – honest

Most rich pots de crème recipes contain lethal quantities of cream and egg yolks. this one doesn’t. Although the coconut milk used in this recipe is richly endowed with cholesterol and saturated fat it’s not the long-chain-molecule saturated fat found in animal products and it’s nowhere near as guilt-inducing.

If you don’t like the flavour of coconut, never fear, you can’t taste it in this dish.

Unless you’re one of the ten people on the planet who suffer the great misfortune of being chocolate haters, I guarantee you’ll love this. I found the original—proclaimed as the best dessert in the world—at thevoraciousvegan.com but that link is now broken. This divine dish deserves to be recorded for posterity, so here’s One Wild Kiwi’s version:
Ingredients:

Don’t go feeling guilty. Dark chocolate is a superfood. It’s choc full 🙂 of antioxidants and will help you live for MegaYonks. Give or take.

Full fat coconut maybe not so great but who wants to live forever?

I’m a sucker for desserts with chocolate and cream. The good news here is that this is so rich and satisfying that a small serving is sufficient even for a weak sinner such as myself and it’s so delicious and luxuriously smooth that the addition of extras like whipped cream is just gilding the lily. Not at all necessary.

If you haven’t tried an overnight bircher muesli you’re missing a seriously healthy and delicious treat. This makes 4 – 6 servings, depending upon your greedy level.

It’s usually served cold. I prefer it zapped in the microwave for 30 seconds to remove the chill. If you wish serve with added milk, yoghurt or soya milk.

Most recipes use fruit juice where I’ve used whole oranges peeled. Any dietician worth their salt will tell you that fruit juice is bad nutritional policy. The extra fibre in the whole fruit helps your metabolism to deal with sugar and cholesterol.

You can use any sort of milk, but soya milk provides creaminess without the fat overload of whole milk. Buy organic if you can and check the sugar content; some brands have too much added.

I particularly like cranberries, but raisins, blueberries, or any other dried or canned fruit will do the job.

In some places you’ll find Light or Lite yoghurt, give it a miss it’s full of disgusting chemicals. Stick with low-fat Greek yoghurt or, if you don’t give a stuff about fat, regular Greek yoghurt.

Keeps refrigerated for at least 3 days.